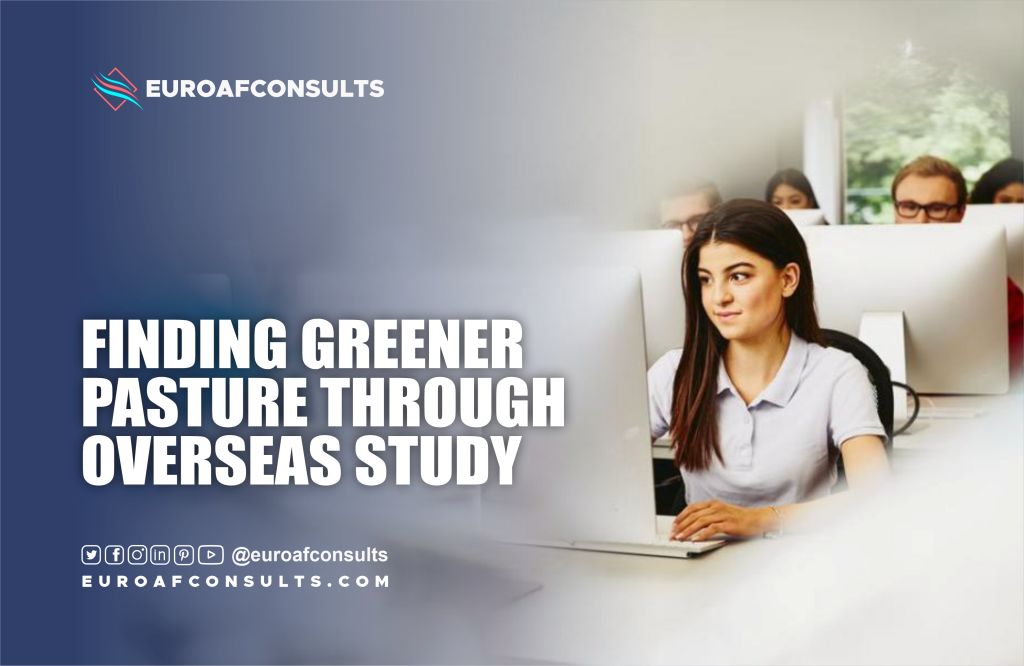 FINDING GREENER PASTURE THROUGH OVERSEAS STUDY, Since the end of the Second World War, there has been a steady mass migration of people into Europe from North Africa, East Asia, and the Middle East.

These are not refugees or some populations of displaced people. They actually went by invitation. As an international student, how do you take care of your mental health?

At first, the invitation is for them to come and work temporarily, and if after some time, they don’t find a job, then they can return. Well, seldom did the number of migrants decrease despite that majority of them were (or are) without gainful employment. iT Goes to show that the situation in Europe is preferable to their native countries, regardless of their joblessness in the new country.

ARE YOU IN SEARCH OF FINDING GREENER PASTURE THROUGH OVERSEAS STUDY? GETTING THE BEST CHANCE HERE IS AN OPPORTUNITY TO GET ONE

And, no, there’s no serious threat or pressure from the government as regards mass deportation.

During the migration crisis of 2015, Germany saw more than 1.5 million people pour into her borders from all these countries. About 800 of these immigrants in October of that year were designated to be absorbed into the town of Kassel, not minding the objections of the citizens.Language Assessments for International Study

FINDING GREENER PASTURE THROUGH OVERSEAS STUDY – Why The Relocation Deluge?

The reasons for this mass movement are not hard to figure.

There are two things to see here: first, a growing number of people from the afore-mentioned continents are looking overseas for the proverbial greener pasture. Second, most developed countries, especially European nations, are willing to welcome them with widely opened arms.

Among other reasons for her liberalism, Europe feels a sense of moral onus to make a sort of reparations for both their past imperialism upon the third world nations and the adverse consequences of the world wars in these same nations. Global Leaders Scholarships at Imperial College Business School, UK

In addition, there is the need of enhancing diplomatic ties with these nations, as well as the United Nations’ development goals of ending abject poverty. All these compound for the reasons for the relative ease of mass migration.

FINDING GREENER PASTURE THROUGH OVERSEAS STUDY – What Does This Mean For A Student?

In simple terms: This means an open door for greener pasture.

How? Through overseas study. Simple. As the saying goes, “Sweet things don’t last forever.” Europe – and other nations – might wake up one day and proclaim “enough is enough with the mass immigration”. Or they might begin implementing harsh policies that would make the migration less palatable.

But one thing is certain: being the birthplace of the Enlightenment, Europe is always on the frontier of raking in students from all over the world who have an intense hunger for quality education. Hence the frequent complain of “brain drain” of underdeveloped and developing countries.

If there is such latitude for migration given to unprofessional people, you can now imagine (if you don’t know yet) the ease you have to travel overseas for the purpose of the study. This is why the most common way to travel abroad is through a student visa.

Presently, higher education in Germany is largely tuition-free. And countries such as Canada, Japan, Sweden, Australia, Poland, and so forth are toeing that line. Grants and scholarships abound in various sizes and packages. Admissions now come easy.

In Case You Have The Brain But You Want Other Business

You can use education as your gateway even if you don’t want to reach the professional or doctoral level in academics.

Many countries have employment/career incentives for international students who have qualifications up to a Master’s degree.

So what are you waiting for? Do you feel your progress stunted in your home country? Foreign education is a veritable escape route. Leverage on it and put yourself over into a better life overseas.

2022 Transform Together Scholarships for International Students

4 Reasons Why I Think Sweden Should Be On Your Radar